We’re coming down to the end of the first 24 hours, and I can move around the world and select entities. 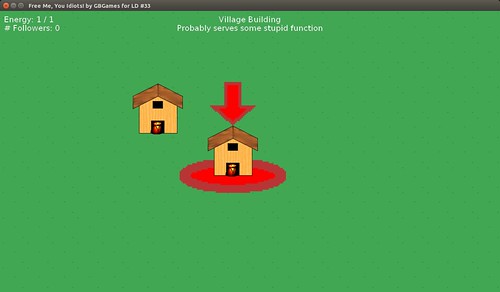 Unfortunately, I’ve been struggling with getting them to do anything interesting. The villagers stand still because I haven’t given them a means of doing anything, nor do they have a reason to do anything yet.

That is, it’s coming down to how complex of an AI I want to create.

As is my pattern, I wrote down everything I could think of that I might want them to have as goals, with the idea that I would streamline it later. I want the villagers to think, “I want to explore, but I also have chores to do, which is a higher priority. I’ll go tend the farm, then explore. Tending the farm means I need to get myself to the farm, then work the farm.”

But then I realized that a hierarchical goal-based AI might be a bit too much for me to chew off. I mean, I could do it, but oof. How much time would that take to debug, amirite?

So I think I’ll go with a simpler state-based AI. While the full version of Stop That Hero! uses a goal-based AI to great effect, the Ludum Dare #18 (Enemies as Weapons) version did decently well with a state-based AI. The entire game worked with only three states, and one of them was AI_DEAD. So it’s doable and simple, which means it is faster and I can focus on the rest of the game sooner.

Hold on to your butts. It’s gonna get hacky.

One reply on “LD33: This Is the Point Where It Can All Go So Horribly Wrong #LDJam”