After I got a working build of my project, which didn’t take too long, I started doodling some monster faces. 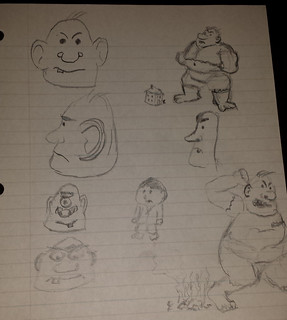 I love how goofy the faces are. I want the monster’s face to be expressive so that it can give clues to the player about what it is thinking.

But just how giant is this character going to be? It can’t be so huge that you can only see its feet. I suppose it would cut down on asset creation, but I envision a very emotive monster which requires a visible face. I want it to be seen as a huge monster, so being merely a head taller than all of the other characters in the game isn’t enough.

But what if there is no player character? That is, the player can interact with the world without having a representative in the world. Then the monster can fit on the screen, and any characters can be incredibly tiny. After all, their faces aren’t as important as the fact that they are running from a marauding monster coming through town.

Maybe they are very tiny stick figures in comparison.

I’m not completely sold on the idea of having no player character. I like the idea of the player running around, trying to get the monster’s attention while avoiding the chaos and destruction. 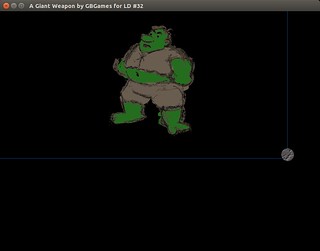 That mock up image of the monster now moves about the screen on its own, although the AI is basically “bounce off the walls” and will need to be replaced.

I realized I was falling asleep as I was coding, so I think I’ll go to bed.