I had some oatmeal with peanut butter and raisins, with some cinnamon and nutmeg. I also had a small glass of orange juice and the smoothie my wife made. 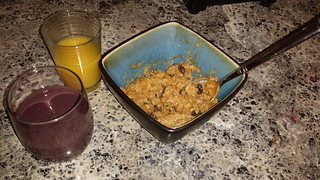 When I drank the smoothie, I noticed that the side of the glass had this very neat texture: 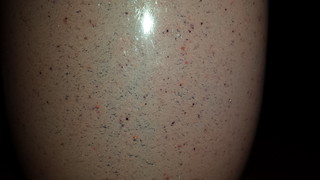 I might tweak the color and turn it into the landscape in my game.

I decided that there will be a player character represented in the game. It adds risk, because if the monster catches up to you, you lose.

So, who are you? I originally envisioned some spoiled brat who wanted to get revenge on the people in his town. Maybe that cool neighbor with the better treehouse will think twice the next time he brags about how much better it is than yours.

But then I took a shower, where we often have our best ideas, and I thought of an outnumbered military unit desperately seeking a way to tip the balance in their favor. Finding a monster to do their fighting for them seems like a good alternative to dying and losing the war.

Which also gives the player a reason to worry about the monster getting killed before it can do its damage.

There’s 34 hours left in the compo. I better start planning.