Back when I was going to school at DePaul University in Chicago, the computer science school was introducing a game development minor. To kick it off, they had a panel involving a few people from local game companies such as Midway and Volition, as well as a few members of the Xbox team from Microsoft.

I remember the vice president from Midway Games answering a question from the students in the audience about how to get into the game industry. He referred to some advice that had shown up somewhere from Midway’s HR that essentially said, “Specialize, don’t generalize.”

I remember not liking that advice then, and I still don’t like it now. It sounded to me like “pigeonhole yourself and don’t you dare try to step outside of your hole”. Telling students who are interested in a future career, “You can improve your skills, but only in this one area of life” sounds overly restrictive and a path to misery. Or at least getting let go when your limited expertise is no longer needed. 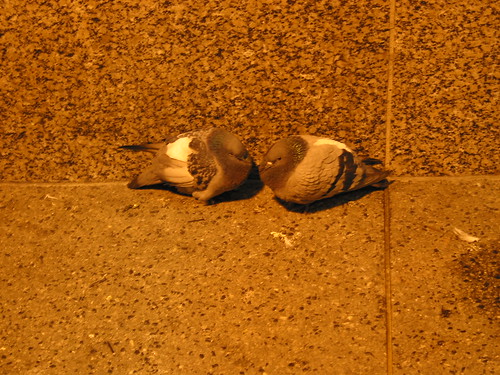 Now, specializing isn’t necessarily bad advice. It’s just not the only valid option, and yet people like to talk as if it is.

Don’t be a jack-of-all-trades. Pick what you like to do best, then get really good at it. Try to be better than anybody else. Let people see that you are an expert at the “thing” you do.

When you get known for that one “thing” you’ll see your art career soar. Now get in that pigeonhole and start working on your “thing.”

He says “Any successful marketer and business owner knows that you have to focus your efforts in order to target your market for sales. If you can’t target a market, you won’t make any sales – that’s business 101.”

He’s not wrong about needing a target market, but I don’t think “targeting your market for sales” is synonymous with pigeon-holing yourself into a single specialty.

He listed a bunch of artists as examples to further his point. The idea being that if you think of someone such as Monet or Jackson Pollock, you will inevitably call to mind some representative work of theirs.

But then, what about an artist such as Leonardo da Vinci? What was his “thing”? What about Leon Battista Alberti? Did he have just one thing?

How about someone more contemporary, such as Viggo Mortensen? I knew he was an actor from his role in Lord of the Rings, but I learned he is also an abstract painter and a poet, among other things.

There’s a lot of advice about specializing, and often it is very good advice, but just as often it is also not really supported by any sort of economic principle. Rather it’s more like “common wisdom” that “everyone” knows.

There’s no actual need to pigeonhole yourself into a specialty. Maybe it’s a tougher route to communicate your “thing”, since someone else can’t easily pigeonhole you as an abstract painter, but no one said it had to be easy.

Maybe rather than thinking about arbitrarily self-imposed limits, the more important thing is finding the thread that ties your story together as Pamela Slim argues in her book Body of Work.

Telling executives at one of the most financially successful businesses in the world “Stop it. You need to niche down” wouldn’t make sense, would it?

The benefits to a focused approach are more than just increased sales. As you begin to focus your work, you’ll begin to get really good at it – better than you thought possible.

While I can see the logic, I also think that I could see someone get really good at their craft if they are able to work with different approaches, techniques, and mediums.

If all you know is oil painting, maybe you’ll get really good at oil painting. But if you know water color as well?

And if you think, “Huh, I wonder how it would look if part of the painting was oil but part was water color?” Would the result potentially be a more interesting work? Would the skill developed in each medium overlap, complement, or reinforce the other?

I don’t know, but I bet a conversation with someone who focused on creating the best work they could with all of their varied skills would be more fascinating and interesting than someone who is Yet Another Oil Painter.

And if their work is more fascinating and interesting, would commercial success also be possible?

According to Vigo Mortensen’s Wikipedia entry, “Mortensen experiments with his poetry and music by mixing the two art forms.”

Do you think his work in one influences the other and makes him a better artist, or does it reduce him to mediocrity because of a lack of focus? How about his music and his film efforts?

Dismissing the jack-of-all-trades as doomed to financial failure easy, but I see no supporting evidence. In fact, in software development, there’s a premium on so-called “full-stack” developers. Rather than hiring someone who only knows how to work with back-end databases or front-end forms, you get yourself a programmer who can do both as well as everything in between.

No one says, “Oh, sorry. we’re looking for a programmer who only knows one kind of programming language.” That’s like saying, “We want programmers who can’t think beyond one paradigm.”

On the other hand, a jack-of-all-trades without a larger purpose, vision, or mission? THAT I can see as being a problem, financially and otherwise.