12 years ago, I was living in Chicago and visiting friends in Iowa, and I learned that their neighbor’s daughter was getting married to someone who was deathly allergic to her cats. She was looking for a new home for them, and since I happened to be interested in getting a couple of cats at the time, I took in Diego and his sister Gizmo when they were three years old.

I was told that he was named Diego because he looked like Diego from the movie Ice Age.

I quickly learned that Diego was a greeter. While his sister hid until she was sure the new people were safe, Diego was always interested in finding out who the new guests were right away.

I remember when I was working at a company that made slot machines, and I was in crunch. So, I would leave early, come back late, and I would feel dead inside. I would plop myself onto the couch or a chair, and soon the cats would drape themselves across me. Diego would especially love to curl up with me. Napping together was great.

Even when I was not involved in crunch, whenever I came home, Diego would get up from whatever he was doing, meow frantically, and come see me. I would often pick him up and carry him, and he sometimes put his front paws around me like he was a child being carried by a parent.

I would whistle a certain way, and he often meowed in response, and every so often he would come to me, which was a neat party trick, except he never seemed to want to do it at parties or when other people were present. 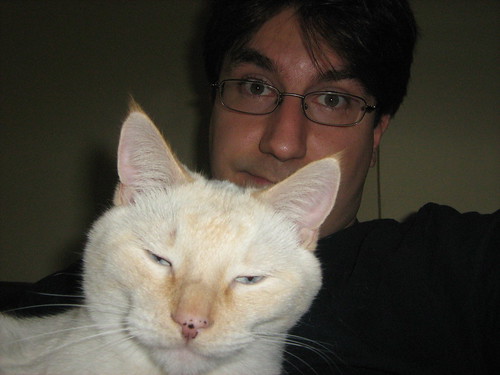 Diego and his sister have been with me through five moves, two states, multiple Ludum Dare competitions, three jobs, and a few relationships. He has been my constant companion for almost a third of my life.

I don’t remember exactly when I realized he was growing old, but it was within the last few years. I might have been tossing him one of his toys and noticing that he was less interested in chasing it. He moved a little slower. But he was still playful, and he was fairly healthy throughout his life. I had to take him to the vet once to get some of his teeth pulled because they were not healthy, but he was fine.

I felt, however, I was on notice, and I realized that one day he might not be around anymore.

In the past couple of months, Gizmo had high blood glucose levels, and so she was on insulin to see if it would help. I changed their diet from dry food to wet food, as I read it can help with reversing diabetes. Gizmo’s levels dropped to the point that she no longer needed insulin, and she eventually bounced back to her old self.

Unfortunately, since I was so focused on Gizmo’s health and her eating habits, I didn’t notice when Diego stopped eating and drinking. They both lost weight, but I chalked it up to a better diet (they were both a bit on the heavy side), but at one point I realized that Diego felt a lot bonier than I could remember. I started to find him hanging out in strange areas, such as the upstairs bathroom, which is never a good sign in cats.

Last week we took him to a vet, and we made an appointment for an ultrasound for this coming Monday, but Diego’s health rapidly declined. It was very quick how he went from seeming perfectly fine to being on his death bed. I checked up on him throughout the day yesterday, but he got so weak that he could barely hold himself up.

My wife and I took shifts to stay with him last night, and when it was my turn, I found he was breathing very shallow breaths. He yowled a bit, and I had no idea if he could see me. I sang to him, talked to him, and pet him. I noticed his paw twitching, and every so often he would take a very large breath, stop breathing for a moment, then pick back up with the shallow breaths. It was awful.

At one point, I saw him stretch his paw out in front of him, which was a lot more movement than I had seen in a long while. A few moments later, he reared his head back, let out a deep groan of a sigh, and he was gone.

I am devastated. I don’t know why his health suddenly got so bad, and I hate that I didn’t see it earlier. I wish he didn’t have to go through as much suffering in his final moments as he did.

5 replies on “A Goodbye to Diego, My Favorite Pair Partner”

Sounds like he had a very good life, and a nice long one, too. *hug again*

Beautifully written. I’m so sorry for your loss.

Thanks for taking the time to share Diego’s story, Franco! So glad I got to meet that delightful true friend. His time had come, after 15 life-filled years. The silver lining is that he didn’t have drawn-out suffering. Diego was blessed to have such a loving human and feline family. And of course he lives on through all the warm memories.

Love you guys. We lost Pickles in March – it hurts so much. Take care of each other. Lots of hugs from New York.