Here are some quick doodles of monsters. I like the idea of the monster being a cute ball of fur. 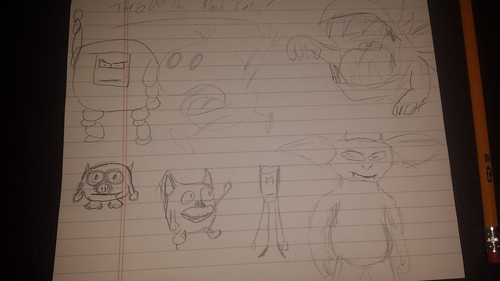 I’ve been thinking about what direction to take this game, and at this time I’m coming up with as many concepts as I can. I set a deadline for me to have a concept ready by the 2 hour mark. I hope to have something sooner, but in case I don’t, that’s the point I stop spitballing and start running with whatever I have that seems to work.

Have you set milestones for your project in a Ludum Dare compo? Or do you just keep going until you’re done?

The constraint I threw on myself: make a non-violent game. Basically, it means that attacking or being attacked can’t be part of the core mechanics, which cuts down the viable concepts quite a bit.

But the player could be a helpful demon or a sneaky creature. There’s still plenty of potentially good ideas here.

I tried to break things down a bit. Here are some notes I’ve made in my design doc to help me come up with the concept of the game.

Where are you now?
– Feudal era, Modern day, Futuristic urban/rural
– Fantasty world
– The pages of a storybook
– On a ship (sea/space)
– In a cave
– Underground, waiting, biding my time.
– In a castle
– In a heavily secured experimental lab on a military base
– In a house, mine or someone else’s.
– Encased in a tree/boulder/etc

Games I can see making at this time:

– You’re a vampire in a village trying to suck the blood of your neighbors while avoiding detection. You’re stronger and faster at night, but you’re vulnerable during the day. It’s similar to a concept I came up with a long time ago, only you were the vampire hunter then.
– You’re a tiny monster sent to help a poor human family. You mend things and try to make things right, but if you’re caught, it’s bad news for everyone. So, a stealth game? I can see this being a platformer to really emphasize the height difference, but I don’t want to spend time on figuring out platformer physics.
– You’re an ancient evil imprisoned in something magical like a tree or boulder, but you have limited abilities. You are able to influence people from a nearby settlement and you want them to break the hold on you, but you need a lot of them and no one knows about you yet. You want them to free you without tipping them off about your intentions. So, a strange sim game?

And there’s 30 minutes left to decide…