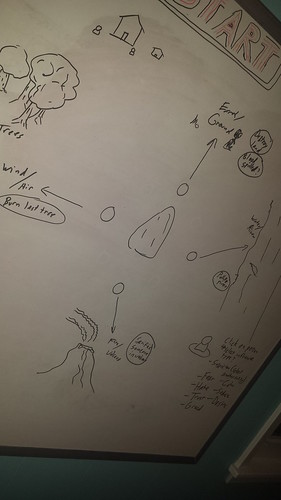 I was choosing between being a vampire drinking the blood of your neighbors while avoiding the vampire hunter’s investigation each day, and being imprisoned in a rock surrounded by magical rocks that you try to get rid of by influencing the nearby villagers.

I think the first is something I can see doing much more easily. I can see the game play, and I can make it as detailed or as abstract as I want. The second one is really complex and still kind of vague. I know what the player can do, but what results are possible, and in 48 hours?

I told my wife about my choices, and she gave me a look like she was worried. I asked why, and she did an impression of me:

“At the start of Ludum Dare, you’re like, ‘I’m going to take on this huge design!’ Then, partway through, you’re like, “I’m worried I won’t be able to get this done.’ Then by the end, you’re like, ‘Doh, I didn’t get as much done as I would have liked.'”

And I decided to go with the second one anyway.

My initial thoughts are that you are surrounded by four magical stones, each one represented by an element such as earth or water.

You can’t directly get rid of the stones, but you can influence the nearby villagers who have shown up in your area. You can click on an individual, then select an influence type. Examples of influence types are:

The vague part: I don’t know what happens then.

I can see Suspicion causing infighting among the villagers. Ok, they’re fighting. Now what?

I can see Greed causing villagers to use up resources more than their neighbors, or kill the proverbial goose that laid the golden egg, perhaps in the form of digging up cropland to search for gold.

My wife suggested that perhaps instead of using this indirect influence, the game play can center around being a monster trying to free something from imprisonment by dealing directly with the four elements. It would be simpler.