Ludum Dare #33 is months old, and the next Ludum Dare is about to begin. It’s about time I wrote a post-mortem about the game I submitted.

The theme was “You Are the Monster”, which, as usual, caused a lot of panic among the participants who worried that it was impossible to make a game based on that theme in two days. And once again, despite such worries, there were almost 2,000 entries submitted, so people found a way to do it.

I ended up making a fairly compelling, somewhat humorous, non-violent strategy game about being an imprisoned evil using its influence to escape. I called it Free Me, You Idiots!

The results of this compo were very encouraging to me: 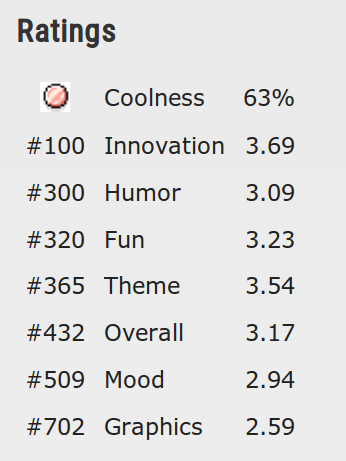 Out of 1,199 entries, my game was rated in the top 36% overall and top 8% in innovation. My only rating that was in the bottom half of the group was for graphics, and even then it was at the top of the bottom half. B-)

I credit my ability to focus that weekend on game development almost exclusively, and all of the tools that allowed me to leverage that focus, such as my design document and setting milestones.

The main complaint from players is that there was a lack of music and sound, followed by the noticed lack of challenge. For future compos, I’ll want to focus on not only interactivity but also adding real conflict.

I may want to experiment with adding audio iteratively. Normally I add it at the end, and an informal survey indicated that a lot of other game developers add it at the end as well. I wouldn’t want to spend time on something that might get thrown out before the end.