I used to have a QBasic game review site, which meant I was part of a small group of sites dedicated to playing and reviewing games made by a small community on the relatively young Internet.

Surprisingly that effort translated into a little bit of paying work when I found out that Game Tunnel was looking for reviewers. I got a little bit of money each time I wrote up what I thought about a specific independent game, plus I usually got the game for free. It wasn’t enough to quit my job and live off of it, but it was enjoyable.

Over all that time, I saw a number of review sites come and go, and every so often one of them would get the idea to do a special write-up on “the worst games of [insert year here]”. Anyone could publish a review site,and sometimes that meant anyone did, and they decided it would be fun to write insults for laughs.

Now, I get it. In many creative industries, there’s always a “best of” list, and there are awards shows dedicated to highlighting the top efforts. So why not a “worst of” list? Why not highlight the terrible? People love to hate on things.

In fact, I didn’t know this, but the Razzies, which highlight the worst in film, have been around since 1981. It’s all in good fun, and it’s actually gotten relatively popular, with a few celebrities coming to accept their Golden Raspberry award in person.

If you search on YouTube, you’ll easily find lists of the worst games. 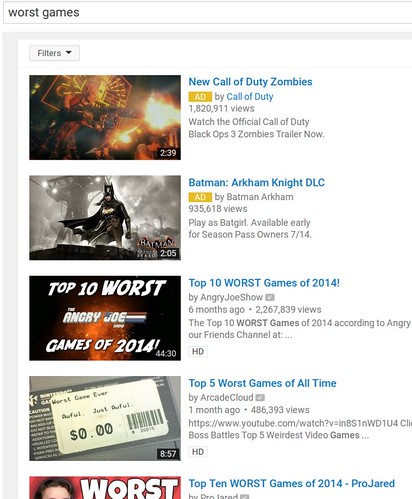 People love to hate on E.T. for the Atari 2600, or John Romero’s Daikatana, or any number of games based on movies.

Ok, so people love to hear about failure. The popularity of reality television already tells you this fact.

I personally think this kind of tear-down is the stuff of tabloids. It’s never something you’ll find at the Academy Awards or The Academy of Interactive Arts and Sciences. And this isn’t a complaint about high-brow vs low-brow. I’m not above a good slapstick comedy or the occasional mindless action game.

In the modern age of citizen publishing media, with blogs, videos, and social network posts, anyone can write about how much they hated the latest stinker at the box office or a terribly-written-yet-popular novel or a disappointing offering from a major game publisher.

But what a terrible way to spend your time! Dwelling on the negative, insulting people you don’t know, and kicking them when they are down? Ick.

It’s also easy. Someone could spend months or years writing and rewriting a novel only to find an online mob ready to hate it upon publication. One cleverly-worded Tweet of criticism, and it can start an avalanche of hate. Because of groupthink, these “Yeah, gee, it’s so awful!” comments can even come from people who have never read the work in the first place (again, see E.T. for the Atari 2600).

It’s one thing to critically analyze what makes something bad. You can comment on the inconsistent plot, or the dated graphics, or question the message. You can say it is derivative and unimaginative and compare it to earlier efforts, such as when my friend Ian Simmons wrote his review of Pacific Rim and compared it to Independence Day. It takes effort and experience to understand why something is bad and to be able to communicate it, and it comes from a desire for improvement. It’s a teacher giving a low grade on a creative writing assignment with the note, “I expected more from you.”

But it’s another thing entirely to slam something without giving much thought to it. At best, it’s a drive-by insult. At it’s worst, it’s bullying. It’s more about the humor of a good put-down than about seeking improvement. It’s the teacher who hates teaching because he despises the students and has to insult them to feel better about his miserable life.

When everyone has the ability to create, you are going to see a lot of terrible creations, and the ease of publishing means some of these creations get front-page status.

That top 10 worst games video on YouTube got over 2 million views. There was a choice made about what to focus on, and the creator of the video decided, “Yeah, let’s go for negativity.”

That’s 2 million people who got the subtle message that criticism is the same as complaining, who think that it’s normal to highlight what’s wrong with something, who shed at least one point of resistance to expressing an insult about someone or their creation because, hey, look at all those other people having fun at his/her expense.

I’ve been focusing on reviewers and critics, but the original purpose of this post was to focus on the act of creation itself, and specifically about game development.

With the wide availability of high-quality tools and resources, anyone can make a game, and many do.

But some people make games with questionable designs. There was a choice about what to include in a game, and the creator decided that gratuitous violence, casual misogyny, and even downright hate was the way to go.

It’s another to make a game in which the only motivation is death and destruction for its own sake. Here you’re just putting together game mechanics with perversity, and not in a good way.

You could simulate complex interpersonal relationships, or you could go the easy route of hypersexualization, stereotypes, and power fantasy.

There are legitimate arguments and positions to take, and there are careless (or careful) non-positions that do in fact take a position.

For instance, making a game about doing nothing but shooting civilians “just for fun” says something about your worldview and the worldview of your game’s fans, at least in what’s considered “fun”.

And with the increased availability of tools and publishing platforms, anyone can make these kinds of choices.

And many do. Sometimes without realizing that they are making important choices.

And some of these choices get front-page status, which means a lot of people get the subtle message that these choices are normal.

It’s why I prefer highlighting the best and get uncomfortable when it comes to tearing down the worst.

It can be petty and mean, and I like to think the wider community can do better.

And focusing on the best means that the creators of purposefully bad creations don’t get rewarded for being horrible or lazy. It means raising something up and saying to everyone, “See what amazing things can be done?”

It means inspiring people to make the choice to aspire to good work, to expect more from themselves.