When I started this weekend, I thought, “I’m going to make a complete game that’s enjoyable to play.” I wanted the Button Masher Bros to play my game and enjoy themselves.

Towards the end of the deadline, I was thinking, “I might be able to get the bare minimum of something that could be called a game in.”

And by the end, I didn’t even have that.

I submitted my project, A Giant Weapon, which you can find at http://ludumdare.com/compo/ludum-dare-32/?action=preview&uid=251 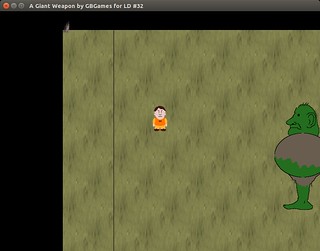 You click to tell your soldier to move, and you try to avoid the monster. There’s a game over screen when you get killed.

You can attract the monster’s attention by clicking on it.

Unfortunately, I didn’t add the reason why you would want to do so: to destroy your enemy’s camp.

Fighting bizarre and non-bizarre bugs slowed me down, but I did not do anywhere near as well as I would have liked.

I wanted to get something controllable by 12 hours in, and it took me almost 25 hours. Then I didn’t have anything resembling playability until the last couple of hours, and then I ran into trying to figure out what AI bugs and graphic offsets issues I had.

I watched my timelapse, and I can see that I didn’t take my own advice about not spending too much time on the art. I think the majority of my efforts involved getting the sprites right.

Oh, and the weird bug that caused bizarre issues with the buffer not updating? I think it turned out to be a glitchy system. Once the computer crashed, and yeah, I needed that to happen near the deadline, everything ran fine for the remainder of the compo. I should have rebooted right away. That problem cost me way too much in time and stress.

I’m pretty disappointed and deflated. It’s been two years since my last Ludum Dare compo, and I feel like I’m not any more capable as a game developer than I was then.

I know I have another 24 hours for a Jam entry, but I planned to dedicate only the past 48 hours to Ludum Dare and I will not be able to do much more.

All that pity aside, I did like my idea, and I think the game in my head would be enjoyable if I could have developed it. A bumbling giant monster that gets easily distracted is chasing the player who is trying to lead it to the enemy camp without getting killed in the process. Part of the game play was to get the giant to move in one direction while looking another, causing it to trip and fall. If it falls on top of a building or other enemy structures and units, they would get destroyed.

Towards the end, I even created quick art to create a building, including rubble, but it never made it into the game.