When I start designing a game, I tend to try to avoid adding random elements. That is, I don’t want luck to enter into the course of events so that they can be repeatable. One thing follows from another, always. I like my game rules to be the physics of my world. I want the apple to fall from the tree at a constant rate. It shouldn’t be faster or slower on rare occasions, nor should it turn into an orange.

Also, I want the player to have as much agency as possible, and a die roll or draw of a random card seems to take it away. You might have been able to skillfully get yourself into a winning position, but because your opponent got a random boost this turn, your hard-earned advantage is completely lost. Sounds like frustration rather than entertainment.

On the other hand, not having random elements means more often than not that the game is solvable, which means that the benefit of the events being repeatable is also a problem. Once you figure out how to beat a challenge, you know how to ALWAYS beat that challenge. The game becomes boring very quickly.

It’s not impossible to make a non-random game that is relatively unsolvable. Chess fits the bill, but it has the advantage of being developed over thousands of years. I’ve only got months to make a game, or maybe hours if it is for Ludum Dare. 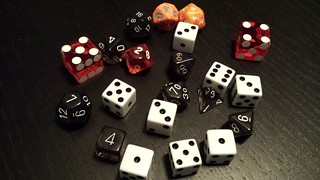 So, I turn to adding random numbers to my games eventually. It adds variety so that each play session isn’t boringly identical. And depending on how you implement random numbers, you control how much of an impact it has on the events of the game versus the actions of the players. For example, in Lemonade Stand, weather forecasts help inform the player. If it is likely to rain, you might not want to spend as much on advertising and supplies. Of course, the forecasts can be wrong. If it doesn’t rain, you lost an opportunity if you didn’t spend any money.

As another example, the dice rolled in Settlers of Catan dictate the flow of resources into and out of the game. Players might not get the resources they need from the random events, but they can still trade for them. And the robber getting invoked on the roll of a 7 encourages players to spend their resources while they have them.

There is a lot of variety in how luck can be applied. Poker, for instance, is a luck-based game. That is, for any given hand, it’s the luck of the draw that determines the winner. Yet the skill in poker isn’t in winning hands. It’s in knowing when to bet and when to fold. The real game is in managing your response to the luck over the course of many hands.

Luck in Games: Why RNG Isn’t the Answer by Elyot Grant breaks down the roles of luck in games and argues that it is possible, if difficult, to address those roles with non-random solutions.

His goal was to fix the problems with competitive games that randomness introduces. When you play a card game and draw a bad hand, your chances of winning are near zero. Similarly, getting a dominant hand almost guarantees the win. Skill and player agency are effectively nullified, and in a competition, it’s never a good feeling to know that you might still lose very badly despite being the best player.

I am not familiar with Hearthstone, which Grant mentions a lot by way of examples, but his analysis of it’s intrinsic problems related to the role of randomness led to the development of Prismata.

I do like how he breaks down the supposed benefits of randomness, arguing that each be obtained without luck. But then, I’m not sure if some of these arguments are applicable in all situations.

With modern online matchmaking and rating systems, any player of any game with a sufficiently large audience should be able to quickly find a match against an opponent that they can beat 50% of the time. There’s absolutely no reason to deliberately increase the role of luck in determining who wins.

But what happens when your game doesn’t have a “sufficiently large audience”? Or if you’re not interested in playing with strangers, which effectively shrinks this large audience?

Are luckless games necessarily competitive? That is, do skill levels need to be comparable between opponents to make a non-random game enjoyable, or can you have a non-random game that is cooperative or single player and still find it compelling?

Luck in games is a major topic. I’ve written about randomness in game design in the past, and there are plenty of books and articles centered on its role. Understanding it means you can leverage it better in your own designs.

I still enjoy challenging myself to design games with no random elements to see how far I can get before I encounter major systemic problems with the game. Grant’s article indicates it can be done. I’d be interested in hearing about other examples. If you know of any, let me know in the comments section below.

One reply on “Making Non-Random Games”

Mage wars is, I believe, another example. There are a lot of tabletop abstract games designed with no randomness, stuff like Hive or Khet.

For playing with friends, handicap systems solve the “small audience” problem. In Prismata, friends often give each other a handicap of a few gold on the first turn. It works pretty well. Go is probably the best example of a game where handicaps are widely used.