Recently while playing a game with my niece, I came across a nice game design lesson.

We wanted to play Pictionary Junior. My parents still had the box from decades ago from when I was younger, but the instructions were missing. So, we looked them up online.

Generally in Pictionary, you draw what’s on the card, and your teammate tries to guess it.

But I found this part of the instructions bizarre:

Decide before you start the game if it’s OK to bend the rules. For example, is it OK to say “tub” if the word is “bathtub”? You decide.

I find it weird because the line before says:

This rule makes sense because it’s hard to police it. Sometimes you can’t tell what is being drawn anyway, so good luck trying to insist that someone can only draw a specific thing. 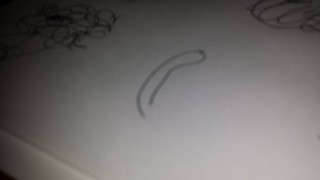 The above was supposed to be a moon, apparently.

Anyway, not only do we have the ability to draw whatever we want despite what the card says we should draw, but so long as the guesser pronounces something that sounds like the word we want them to guess, it counts. “Sun?” “Yes, it’s son! We win!”

So, why would you need to also allow for not saying the entire word? It seems like an unnecessary way to make the game easier.

Well, this game’s audience is meant to be children between the ages of 7 and 12 years old. Allowing the players to choose to bend the rules in this manner makes the game more accessible to the really young players.

If the game is too challenging, it causes too much frustration. I’m sure you’ve played with younger children who got upset when they lost on a technicality: “But I said tooth!” “Yeah, but the word was teeth!”

So, allowing for bending of the rules as part of the rules helps make it fun for everyone while allowing the game to grow with them. Maybe after a certain age, they might try with the heavier requirement of guessing the entire phrase or word instead of getting close enough.

You might find ways you are willing to bend what is otherwise a “perfect” design decision in favor of your intended audience’s enjoyment. And then, it’s not really bending the rules so much as designing them that way in the first place. B-)