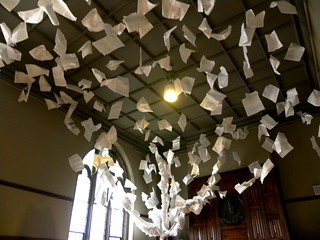 Sometime back, I read the article How to Be Prolific: Guidelines For Getting It Done From Joss Whedon.

The interview was published shortly after Whedon’s Much Ado About Nothing, filmed while The Avengers was still in post-production, hit theaters. Being able to put together a second film on the side while working on a major Hollywood production is impressive enough. Whedon is also active in comics and television shows. The guy is just everywhere.

The main points, from what I gathered:

You can read the full article to get the meat of each of those things.

What I think linked everything, however, was his focus on being purposeful. If you don’t know what you’re trying to accomplish, it is easy to let things happen to you.

That paragraph might not sound mind-blowing. Stephen Covey wrote about keeping the end in mind in The Seven Habits of Highly Creative People decades ago. Being results-oriented isn’t a new idea.

But Whedon brings it to everything: his process, his downtime, his friendships, his life.

As a part-time indie game developer, I could say, “This evening is dedicated to game development”, and then find at the end of a few hours that I’ve gotten nowhere. On the other hand, if I task myself with coming up with an interesting core mechanic or introducing a new character, it’s specific and focused work that by its nature gets done. It’s about focusing on results, no matter how small, on your way to get the larger result, no matter how big.

I could spend each night vegging out in front of the TV, or I could schedule time to go to game developer meetups, conferences, seminars, and panels. I could read books, play boardgames, or write blog posts. Or if I am going to watch TV, it should be for the higher purpose of spending time with my wife, or learning about ancient 90s culture (seriously, Frasier is amazing), or something besides merely not being creative enough or motivated enough to think about doing something else.

I could play video games to pass the time, or I could play them to critically analyze the hell out of them for the purpose of understanding game design better. Even better, I could play the heck out of games that are both incredibly similar and incredibly different from what I want to create right now to get a sense of what’s been done and what’s possible.

I knew someone who went to the library after his day job to work on games for four hours a night every night. Over the course of a few years, he went from knowing nothing about game development to being able to publish a number of games in a short span of time. That developer knew what he wanted.

The older I get, the more I realize how precious my time is. Time is the only thing we really have to invest in anything.

If you want to be more prolific, if you want to create well-received works, stop and look at how you spend your time. Is it on purpose? Are you taking responsibility for what you are doing with your limited time, or are you going with the flow, allowing the agenda of other people to exert more force in your life than your own choices?

Doing creative work, you will struggle at times. It’s not going to be enough to say you’re making what interests you. You need that higher purpose to get you through the game developer equivalent of writer’s block. You’ll need to know the results you’re trying to achieve when you’ve scrapped months of work because you find it doesn’t actually work.

And frankly, you’ll need it when you look back and wonder what you’ve really accomplished. Did you do what you set out to do, or did you merely do?

The other day, Dan Cook tweeted about this concept:

After years of making art, I've a personal distaste for 'ignorant creation', putting the monkey at the canvas & blindly pouring out whatever

Yes, it is nifty that we, as creative gods, can make things. Cool. Pat on the back. Now what is the greater purpose of the stuff we build?

It’s fine to have a list of tasks to accomplish for your current project. After all, it makes sense to break down the tasks and get it done.

But did you similarly think about the point of your current project? How does it fit into your vision for the future?

Last year, Notch posted about the news that broke when people found out he wasn’t working on 0x10c anymore. In So That’s What I’m Going to Do:

What I hadn’t considered was that a lot more people cared about my games now. People got incredibly excited, and the pressure of suddenly having people care if the game got made or not started zapping the fun out of the project. I spent a lot of time thinking about if I even wanted to make games any more.

And then there was Dong Nguyen, creator of Flappy Bird. The game was making him $50,000 per day, and he pulled it down. Why? According to this Rolling Stone interview, it was partly because he felt responsibility for the people who blame the game for losing their jobs or becoming isolated from their families.

In both cases, what did these games mean for the developers besides interesting experiments?

Or put it another way: when you think of a company like Mojang, what do you think of besides “they made Minecraft”? When the company publishes a new game, what can you expect? I’m not sure, because there doesn’t seem to be a larger purpose to the organization. It’s a company that happens to have a major hit to fund it, but it isn’t clear what principles or values it has that dictate what they do next other than “This seems interesting today”.

There’s nothing wrong with it, and it is great that they have the freedom to explore whatever they want, but compare it to a company such as Toca Boca, creator of Toca Hair Salon and other fascinating children’s games, including one that seems very similar to Minecraft:

Toca Boca is a play studio that makes digital toys for kids. We think playing and having fun is the best way to learn about the world. Therefore we make digital toys and games that help stimulate the imagination, and that you can play together with your kids. Best of all – we do it in a safe way without advertising or in-app purchases.

If you hear that Toca Boca is publishing a new game, you know in general what you’re going to get. They have a purpose, and they are organizing everything towards that purpose. You won’t see them publishing a very eclectic collection of games. They won’t be exploring survival horror or creating the next major FPS because they would be distractions from their larger purpose.

What you achieve in your life is going to be a direct result of what you do today. At the micro level, you have the tasks you’ve identified in front of you for a given project, but at the macro level, you choose the project to work on in the first place.

Or I suppose another way to say it is that if you execute everything perfectly but you did the wrong thing, you’ve wasted a colossal amount of time.

What’s your common thread that ties everything together? If you want to be prolific, it’s not enough to churn out random work. Having that vision about what you really want to accomplish is incredibly vital.

Do you have one?