GDC 2016 is over, and it featured talks by successful game developers sharing what they know.

It’s always tempting to find out what successful people do. The hope is that we can glean some insight into what WE specifically can do to be successful as well.

How would you know?

Most failures aren’t around anymore to share their story.

Before you make that decision, you should probably ask all the college dropouts who didn’t create huge businesses despite trying. Unfortunately, it’s hard to find them, and you’re unlikely to see read a book or even a blog post about their experiences.

Or if you talk to a financial guru who says, “Look at these stock picks I have! If you look at them, they’ve beaten the market by 12% for the last five years!” What this guru isn’t saying is, “And during those five years, I’ve been removing the poorly-performing picks I’ve also made, which would skew the results negatively if you saw them.”

Or when people talk about music today being terrible compared to music of the past. If you turn on the Oldies station, you’ll hear great music from the 50s, 60s, 70s, and now the 80s and 90s (oh, geez, I’m old), but you won’t hear all of the terrible stuff that was put out during that same period of time.

Why? Because it was terrible, so only the best music survives for the future to love.

The book Good to Great by Jim Collins aimed to find out what were the universal distinguishing characteristics that cause a company to become consistently successful over a 15 year period.

Since the book was published in 2001, many of the companies highlighted got into trouble. Maybe they were great once, but clearly the “universal distinguishing characteristics” weren’t so universal.

So what happened here? 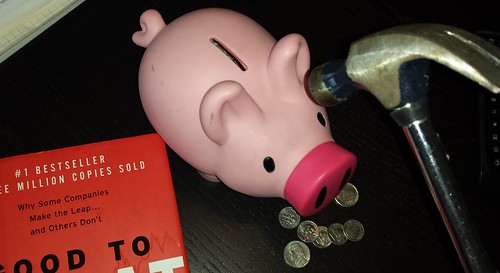 I’m currently watching some videos on Machine Learning offered by Cal Tech professor Yaser Abu-Mostafa, and in one of the early lectures he mentions something fascinating.

Let’s say you flip a coin 10 times in a row. What are the odds you’ll get heads each time?

So, somewhat unlikely. Roughly 0.1% of the time, you’ll get all heads.

But if you flipped 1,000 coins 10 times each, what are the odds that at least one of the coins will produce heads for all 10 flips?

But it doesn’t say much about that one coin, does it? There are no insights into the coin’s design you can make. There is nothing about the way it was minted that is unique. All of the coins had a chance of flipping all heads, and this one just happened to be the one to do it.

And yet a lot of business success books are written this way. They look at successful businesses in hindsight, and then the authors try to identify the qualities of those lucky coins that resulted in them being so great, and they often ignore the rest which might be built and run similarly.

That isn’t to say that I think business success is a 50/50 flip of a coin. And to be clear, I think it does help to identify strong successes and see what we can learn from them.

But if we ignore the failures, then we don’t know if what we see successful companies doing is really so different and insightful.

From You Are Not So Smart:

Also, keep in mind that those who fail rarely get paid for advice on how not to fail, which is too bad because despite how it may seem, success boils down to serially avoiding catastrophic failure while routinely absorbing manageable damage.

I gave a talk at Startup City Des Moines in 2014 about lessons learned having failed with running my own indie game development business full-time. I was surprised when one of my friends who worked there kept thanking me. She said that it’s very rare for anyone who has failed to share their experience, which is too bad because it would be so helpful if more did.

So if you failed, don’t shy away or be embarrassed about it. Let us know about it. Tell us what you learned.

Provide more data so that survivorship bias isn’t as easy for us to succumb to.