Dan Griliopoulos wrote Saddling Up The Horsemen: Is the market getting tougher for indie developers? at ShowMeTheGames.com, in which he argues once again that the so-called indiepocalypse isn’t new.

He interviews a few people to get their perspective, but I have been hearing this story for many years.

Ever since I was part of the Dexterity forums, which are now the Indie Gamer forums, conversations have gone like this every few years:

“Man, things were so much easier in the past.”
“What are you talking about? Today’s indies have it so much better, what with all the tools and resources we never had back then.”
“Yeah, but it was easier to stand out and make money back then.”
“But there wasn’t that big of an audience then either.”

All last year, similar articles have come out basically saying there is a confluence of market conditions making the industry a more difficult place to succeed for most individuals, that it has always been this way, and we don’t even have enough data to talk about it very intelligently.

Bottom line: it’s easier than ever to make games, but obscurity has always been deadly to the indie game developer.

Some argue that getting attention and financial success as an indie game developer is primarily a matter of luck.

While I won’t discount luck being a factor, it’s not something you can plan for.

Since I can’t plan for it, what can I, as an indie game developer, do instead?

I can learn how to run my business like a business.

Because it is one.

I think the phenomenon of people worrying about how much easier it was to get attention in the past stems from the ability of so many to focus on just product development and having the marketing and sales taken care of for them.

Apple is producing a new type of platform that takes off, and it needs games? An indie game developer back then might think, “Wow, getting my game noticed is easy! My marketing plan can literally be a single line written on a napkin: ‘Release my game on iOS.’ There is nothing else I would have needed to do back then except focus on making a good game, which is what I really want to focus on anyway.”

In all of these indie game development platform waves, there was a rising demand in the market, and almost all you had to do was show up to take advantage of it. There were other parties such as Big Fish or Apple or Microsoft or Google who had a keen interest in seeing your success, so they did a lot of the leg work with promotions and awards. It’s like being the only water salesperson at a desert oasis. The money flows to the indies who exist in that space.

What happens when the market is saturated, and those parties don’t need to worry about promoting any one individual game so much? Suddenly, the lack of a marketing plan for an indie game developer is a huge gap in their business plan. Now you’re selling ice to Eskimos.

And many, many indie game developers aren’t aware of it. After all, they just want to make games. All of this business stuff? Ick.

This business anathema isn’t unique to game developers. Michael Gerber wrote The E-Myth Revisited: Why Most Small Businesses Don’t Work and What to Do about It back in 1995, which was a follow-up to his 1986 book The E-Myth.

I got the audiobook in 2012, and I wish I had gotten it many years earlier. I didn’t because I thought the E stood for Electronic and was basically going to be about how Internet businesses are not any different from regular businesses.

Instead, the E stands for Entrepreneur, and the book is an eye-opener for anyone who is starting out.

Most small businesses are started not by business-savvy individuals but by technicians who think “I know how to make widgets. I’ll be my own boss!” These technicians work IN their own businesses, not realizing that what is needed is for someone to work ON the business itself, and for someone to manage the processes to get the results desired. 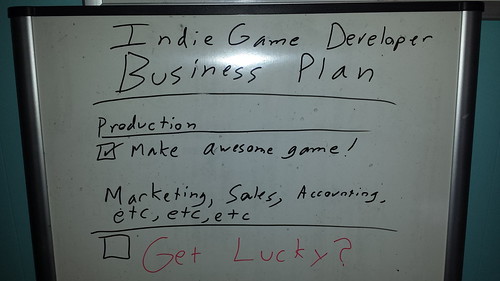 Running an indie game development business requires more than developing games. It’s a key part, sure, but a good business seeks out the opportunities that it can take advantage of. It finds ways to get attention, whether it was through ads, press contacts, YouTubers, or whatever the next thing is. It makes decisions about what game to make based on more than mere whim. It makes intelligent risks based on incomplete data, but it doesn’t ignore the data and guess. It defines success beyond vague statements like “making more money than I spent.”

So maybe it only looks like the successful indie game developers got their success through luck because so many of them don’t do have much more of a marketing plan beyond releasing on Steam or iOS. They don’t have much of a sales plan beyond, “I hope a lot of people buy my game. Like, a lot a lot.”

Again, luck can play a role for some. Flappy Bird was a game that happened to get picked up on network television one day long after it was released. Minecraft became a huge hit when Notch had a day job, and he never expected it to become the flagship title of an actual business.

But there’s a difference between hobbyists who have success find them and indie game developers running a business seeking success.

Maybe the problem isn’t that the market is crowded.

Maybe the problem is that many aspiring indies suddenly find that they have to do the hard work of running a business, work that looked like it took care of itself in the past.

I’ll check out the E-Myth Revisited book, thanks for the suggestion. Hopefully it’ll serve me as you feel it did you!

[…] the article that got me thinking about all of this is “Indie Developers Have Always Needed to Treat Their Businesses Like Businesses” which is a very good, concise […]

[…] written before that indie developers have always needed to treat their businesses like businesses, partly in response to how many people think that running a game development business is just […]

[…] There’s always unimplemented features and more balancing work that could be done in a game, right? As a developer, I KNOW how to do that kind of stuff. It’s easy to stay in the comfort zone of being the technician. […]

[…] if there is potential for return, but once they invest, they are looking to put you through the motions of running a business. Because let’s face it, development is a business. Working with publishers means you give them […]