Earlier this month, I watched a 2013 recording of a game design talk by Lost Garden’s Daniel Cook, Game Design Theory I Wish I had Known When I Started:

The slides don’t actually seem to exist anywhere, by the way.

It’s a great presentation, and he goes very high level, leaving the details of each item as an exercise for you to explore in your game design education.

At some point he mentions that there are only a handful of game design books worth having, and he lists three of them in his talk.

I already owned a copy of A Theory of Fun for Game Design by Raph Koster. It was out of print for a bit, and I was strung along by an ordering system snafu on one website that couldn’t actually seem to process the order in 2008.

But eventually I got it, and I should probably reread it again because in watching Cook’s talk and in seeing comments by others, everyone seemed to love it more than I remember loving it, and maybe I missed something the first time.

The other two books Cook mentioned in his talk are: Game Feel: A Game Designer’s Guide to Virtual Sensation by Steve Swink and Game Mechanics: Advanced Game Design by Ernest Adams and Joris Dormans.

I didn’t know about these books, but on the strength of Cook’s recommendation alone, I ordered them, and now I have my own copies. 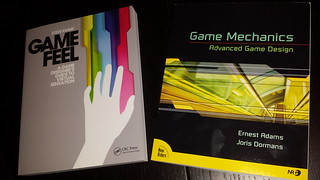 When I was in college, I studied computer science, and I had a roommate who studied Human-Computer Interaction. I remember thinking that HCI would come in handy in game development, and here Swink has written an entire book on the topic geared towards games.

I used to own a book by Ernest Adams and Andrew Rollings called Game Architecture and Design, and the only reason I got rid of it was because a new edition had come out. Ernest Adams has written quite a few books on game design, some geared towards specific types of games. Game Mechanics is over 300 pages of deep exploration of the topic, and I look forward to diving into it.

Both of these books are deep dives into subtopics in game design. There are other books on my shelf that I really enjoyed which are a bit more general.

One is Game Design Workshop: A Playcentric Approach to Creating Innovative Games, Third Edition by Tracy Fullerton, a great textbook which I reviewed last year. I also went through a number of the exercises weekly for a time, which you can see at Game Design Workshop Wednesdays.

One book with accessible, non-digital exercises that do not require a computer or other expensive technology is Challenges for Game Designers by Ian Schreiber and Brenda Romero. Combine this book with Schreiber’s free online courses on game design, Game Design Concepts and Game Balance Concepts, and you’ve got a good set of game design educational resources.

Tynan Sylvester’s Designing Games covered some of the same ground as other game design books, which is to be expected, but it also brought some fresh perspective and seemed more holistic. I appreciated the discussion on marketing and business influences since games aren’t created in a vacuum. I wrote review of Designing Games last year as well.

What game design books on your shelf do you find the most valuable?