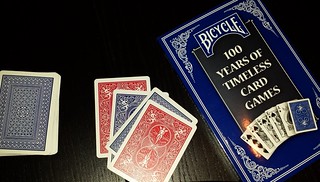 Last night, my wife taught me a card game she played with her grandmother earlier that day.

Hand and Foot is a Rummy game similar to Canasta, but it apparently has no standard rules. It was hard for us to look up what is allowed in certain situations. For instance, I was at the end of my Foot, and I had drawn two cards and now had an Ace and two Jokers. If I play them, I have no card left to discard. Am I allowed to do so, or do I have to discard at the end of a turn, meaning I can’t play my hand and must either give up a valuable Joker or an Ace.

It occurred to me that I’ve never played many card games. These days, I play Four Point Pitch and Up and Down the River with my in-laws, games I didn’t know a few years ago until they taught me. When I was younger, I played Solitaire, Kings in the Corner, and Thief with the Italian playing cards my parents always had on hand.

But as a game developer, shouldn’t I be more well played than I am? There are centuries of games out there, but if I limit myself to the popular video games of today, aren’t I also limiting my source for inspiration?

Granted, many are thinking that today is the Golden Age of Board Games. Between Kickstarter and popular cons, people are creating and playing games that aren’t the usual Scrabble and Monopoly. I’m participating in a few board game nights these days, whether it is at the day job or with friends, and I’m learning quite a few games.

But I’m sure I can stand to learn a wide variety of card games. We even own a copy of the book Bicycle: 100 Years of Timeless Card Games, and I’ve never read it.

I’ve seen similar books on card games that are larger and probably more comprehensive, but 300+ pages of card games with their variations is a good starting point.

When playing Hand and Foot, I noticed a few self-regulating aspects of the game that were pretty clever. For instance, if you want to pick up the discard pile, you had to pick the entire pile up. If it was full, it meant you suddenly had a lot more cards in your hand, which means you can create melds more easily, but the discard pile might include multiple dangerous red 3s, and you can only get rid of each one once per turn. Have a red 3 in your hand reduces your score by hundreds of points. It’s a risk you might be willing to take if you have been struggling to complete melds, though.

So just exposing myself to this one new old game got me thinking about game design. What if I spent time learning more such games in earnest? I wrote about consciously consuming information daily, and reading and listening to a variety of information is beneficial. I’ve been thinking about how important it is to also play a variety of games.

The great thing is, I already own a deck of cards. I’ve paid the expensive part. It can be quite the investment to get a new board game or video game, but a trip to the library might be all I need to do to find books on card games I could play with my existing deck.

Heck, I also have a bunch of dice, and I’m sure there are plenty of dice games out there, too.

It’s time to make a conscious effort to learn some new games. Got any recommendations?

Every time I sit down to play Rummy with someone, we have to negotiate what all the rules are. And I say “rummy” but sometimes mean “Gin” or “Gin Rummy” or “Rummy 500” or… The problem being we all called it by a generic name, and had our household variants, but when you start playing with other people you discover just how many there are. Do you place the cards down, can you play on other people’s melds, can you loop around K A 2 -style? If you can pick up discards, is it just the top card, or all of them. Do you then have to play the bottom card you picked up or not? Do you have to end your turn with a discard?

So.Many.Variations. It’s fun, but it sucks to find out you’re playing two different games. I guess it’s like dealer-calls poker, where they say stud vs draw vs hold’em and number of cards, etc. At least the hands mostly stay the same.

Yeah, it can be a pain to actually organize a game, but what a fun set of experiments for a game designer!

And it isn’t limited to standard card games. Once I played Monopoly and found out the other players didn’t know housing shortages were a part of the game. There goes my strategy of buying all the houses and not the hotels.

The other day I played Saboteur with coworkers who play the game silent. No table talk allowed.

It’s a stark contrast to the people I’ve played with who treat it as a bluffing game.

It results in two very different experiences, and the designers are deliberately silent on this point, so both are right, but yeah, you need to make sure everyone is playing the same game.