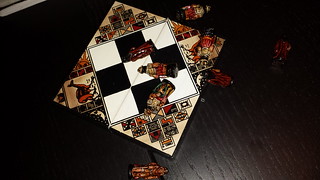 Most grown-ups can learn to play a new game without too much difficulty, and when they play, losing is understood to be a perfectly expected occurrence. That is, if someone loses, it is entirely possible that person still had fun playing the game.

Young children being introduced to games, on the other hand, sometimes have difficulty with a loss. They may pout or throw tantrums. Some sessions might end with these sore losers tossing the board or cards so that no one can play.

Even before it gets to this point, you might encounter a child trying to win at all costs. You might notice the child being really obvious when slipping a specific card in the right position in a deck before dealing.

Or if you are winning a game, you might be accused of cheating yourself. This accusation is especially ridiculous when playing a video game in which you can’t cheat.

Do you let the child win? He or she might be obnoxious about it. If you thought trash talking was annoying online, play against a cocky kid.

But how do you teach a child that losing isn’t the end of the world, that you can always play another game, that there’s such a thing as sportsmanship and dignity in defeat?

While researching this issue for educational games I want to make, I came across the 2012 Psychology Today article Winning and Losing by Dr. Kenneth Barish. He argues for playing often together and letting the child win, but only sometimes.

It is also important for us to keep in mind that, from the point of view of child development, the philosophy of Vince Lombardi (“Winning isn’t everything, it’s the only thing”) is profoundly wrong and teaches exactly the wrong lesson.

By winning and losing constantly, the child gets to practice dealing with disappointment and learns about his or her own limitations.

Eventually, children should start to understand that games involve agreeing to rules and restrictions. If you start a game of checkers, you can’t just walk away before the game is finished, and you definitely don’t throw the board in the air after your opponent’s piece is kinged.

In the meantime, is it possible to design games so that learning how to play by the rules is less stressful? Where losing isn’t as prominent?

Or is it wrong-headed to try to make a game in which everyone is a winner and so overly-protected children never learn the lessons they need to interact with others when they get older?

Games have always been a safe place to learn life skills. Whether you are running and jumping on the playground or calculating an opponent’s potential moves in chess, you learned how to navigate complex social interactions through play.

Now, there are games that can be played that don’t feature victory or loss, and recreational sports tend not to keep score for very young children. Are these games hampering anyone’s learning? The good news is that “games without winners and losers will have little effect on the desire or ability of children to excel.”

So it seems that you can choose to design a game without the ability to lose and not worry about damaging anyone’s upbringing. The key seems to be to focus on helping players get better, which is something games with their feedback loops are great at anyway.