This week, I’ll be applying what we’ve learned so far by playing a simple game and then identifying the major elements of it.

The exercise first asks us to play a game of 3-dot Sprouts.

I’ve never played it, but it reminded me of a game I used to play in school, which was apparently called Dots and Boxes. It felt like a more challenging Tic-Tac-Toe in that there was always an expectation that I could figure out the trick to winning consistently.

In Sprouts, you connect dots with lines, taking care that no dot has more than three connections coming out of it and that no lines cross each other.

So, my first attempt at playing the game was a failure because I didn’t realize I had four lines connecting to a dot. Whoops.

My second time, I created a loop, connecting dots with a line that circled another dot. I found that even though I had a dot with only one connection outside of that circle, I couldn’t connect it to any other dots due to the limitation on connections and the inability to create crossing lines.

My third session, I started with a triangle, and then I started bisecting the triangle. Eventually, I found I had one point within the triangle that couldn’t connect to any other points, and one point outside of the triangle in a network of arcs I had to create to try to match up free points. 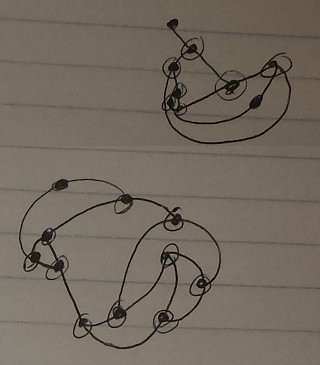 Ok, so I’ve played Sprouts, a game created by John Conway of Game of Life fame and Mike Paterson, one of the people who recognized computer science as a science. The exercise now asks me to identify the formal elements and the dramatic elements of the game.

Now the exercise asks me to identify types of dramatic elements that might add to the experience.

I’ll take them in turn. 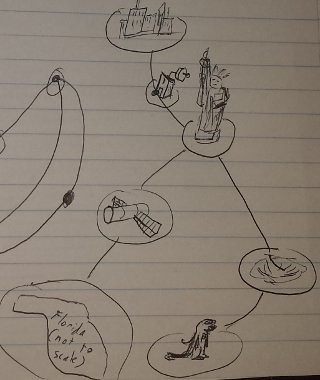 Wow, this story-based one gets ridiculous pretty quickly.

I learned quite a bit about Sprouts, and I had some fun with thinking about the dramatic elements that could be applied to what is otherwise an abstract math game. It makes me wonder how much I underappreciate a good theme and story in games.

Next week, I’ll skip ahead to Chapter 7 and work on a prototype.