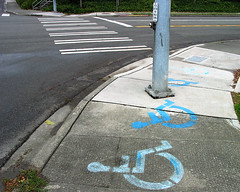 I just learned about Accessibility Jam, which is running from May 11th through June 1st.

The goal of this jam is to raise awareness, giving developers knowledge and experience of how to make mainstream video games accessible to gamers with disabilities, to provide good examples of what’s possible, and move accessibility towards being widely accepted good practice in the game design process.

The idea isn’t to make niche games that cater specifically to gamers with disabilities. The jam is meant to raise awareness and increase the accessibility of the kinds of games that are already being made.

I’ve written in the past on designing games to account for color-blindness. I recalled a beta test for a game in which one person complained about how hard it was to see the green vehicle on the green grass. This complaint confused me at first because the vehicle in question was blue. I eventually changed it to look significantly more interesting and give it a different color. Without that beta test, I would have inadvertently ignored a significant chunk of my audience.

Ok, so you can easily accommodate a color-blind player by using more than color to differentiate important aspects of your UI. You just need to be conscious about it and know about the tools of shape and size.

But what about players with other vision impairments, including those who have difficulties with reading? Or people who have hearing, cognitive, or motor impairments? Accessibility is a big topic, and you can’t possibly be expected to spend the time and effort here when you are trying to focus your attention on making the best game you can, right?

Well, the jam provides some awesome accessibility resources and tips, which features a number of useful links, such as the Includification Guide provided by the AbleGamers Foundation. This PDF is only a little less than 50 pages and offers practical checklists, advice, and examples, as well as numbers to indicate that there is a significant market you can reach with your efforts in accessibility.

Another link is Game Accessibility Guidelines, “a straightforward reference for inclusive game design” broken into basic, intermediate, and advanced topics. This site is a treasure-trove of information, and more importantly, it shows how easy it is to address accessibility. Basic considerations include using easy-to-read fonts and font sizes, especially as reinforcement of audio cues. Such a small effort means not just a more accessible game but a better game for everyone.

An example of an intermediate consideration is providing options in game speeds. Offering game speed configuration and the ability to prepare actions while the game is paused are some easy ways to assist those with motor and cognitive impairments. As a side-effect, it means accommodating people with different preferred play styles.

Once while demonstrating my casual real-time strategy game, Stop That Hero!, to someone, he requested that I add a game speed slider. While I’ve had requests for a way to increase speed when you just want to get your orcs across the map quickly to see what happens, this player wanted something more like a turn-based game.

Pausing the game but still allowing player interaction meant that he could take his time to make decisions about what minions to summon and where to summon them. I’m afraid I never got to that feature before I put the game on the back-burner, and while I initially didn’t like it as I thought it might ruin the feel of the game I was creating, I have since realized that allowing players to enjoy the game at their own pace allows for a much better experience for more players. That it means the game would be much more accessible to people who might not otherwise be able to enjoy the game is an exciting prospect.

So, are you planning on participating in Accessibility Jam? It sounds like a great opportunity to learn and practice ways to make your game more playable by a wider audience.