Tic-Tac-Toe, or Naughts and Crosses if you are wrong, is a children’s game. It’s a solved game, which means there is always a best move someone can make, and the only reason why it appeals to children today is because they haven’t figured out the solution yet.

In any case, it’s a simple game. Let’s analyze the heck out of it as a game design exercise.

First, let’s look at the rules of Tic-tac-toe.

Choose a player to go first.

On a your turn, you place the piece you represent in an open square in the 3×3 grid.

That’s…pretty much it. All you can do is place your piece in the grid. Then it is the other player’s turn.

If, after placing a piece, you have three of your pieces in a row, column, or diagonal, you win the game.

If there are no more open squares in the grid, and no one has won, then the game is a draw.

It doesn’t seem very complicated once you write it out, does it? We knew it was a simple game, but wow, that’s pretty simple.

What’s interesting is what’s not explicitly mentioned in the rules but ends up being a part of everyone’s mental model of the game.

Here’s an example game in progress: 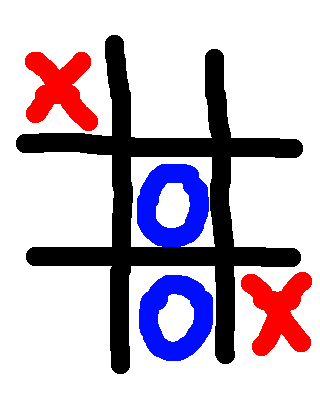 If it is X’s turn, where should the next piece be placed? At the top center square in the grid. Why?

To block O from winning. Because O just needs to place one more piece to get three Os in a row and win, and X doesn’t want to lose, X has one move that prevents O from winning here. Blocking isn’t explicitly mentioned in the game rules, and yet it becomes a key aspect of any serious Tic-tac-toe player’s strategy. 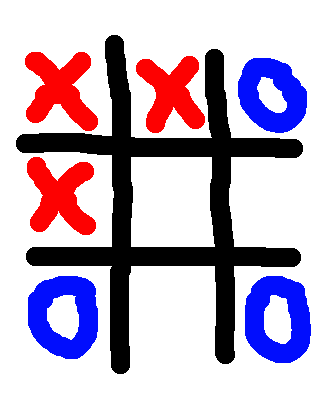 How about the above situation? O has just placed the piece at the bottom right. What’s the next move for X?

The answer: it doesn’t matter. O has forked and is now potentially able to win on both the right column and on the bottom row. If X places a block in either the bottom center or the middle right spot, then O simply places a piece in the other spot and wins the game. Forks are also absent from the rules, but expert players always look for an opportunity to create one.

Blocking and forking are examples of dynamics that are the emergent properties of the game’s mechanics. A minor change in the rules can have an impact on the game play.

What if you could use your turn to destroy a piece and open up a space in the grid? The obvious idea is that it would be hard to win because players would essentially destroy the opposing player’s piece any time it threatened to get to three in a row. Ok, what if we allowed each player to do so only once in a game? 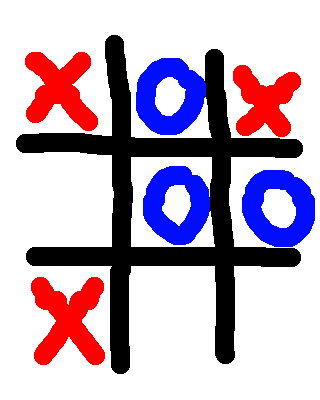 It might slow the game down a bit. Destroying a piece merely delays the opposing player’s move by one move. The game is so simple and so very, very solved that it might not really change the nature of the game much.

But one dynamic that might evolve is the discovered fork, as the above example can show: even though O is threatening to win with a fork, X has just placed the piece at the bottom left. What if X decides to destroy the O in the center? Now instead of merely preventing a potential win by O, destroying that O resulted in a fork in which X can now win either with the left column or the diagonal.

The end of this game would still be a draw if everyone played perfectly, but it might surprise the amateur player.

Even without custom rules, it’s easy to see how the simple mechanics can result in more complex game play than might be expected. Even a simple game like Tic-Tac-Toe has emergent game play that derive from the rules.

The big takeaway lesson here is that you need to see a game in action in order to really understand the game, which is why playtesting your own designs is so important.