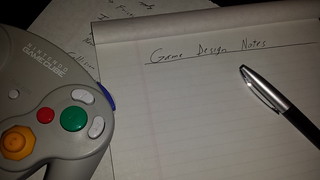 It can be argued that being a good game designer requires exposure to a wide variety of games.

By playing, breaking down, and studying games, you learn what already exists, how well it seems to work, and what is available to borrow or steal from.

How people approach this study can vary. Some people are methodical, keeping detailed notes on each and every play session.

Others might bother to record their experiences, preferring to let those things that influence them more organically pop up into their consciousnesses as they work later.

Personally, I’ve occasionally written a blog post about the design of a game, but I think I would benefit from taking time to more deeply analyze games and recording my observations to refer to later so that I don’t forget or gloss over them.

How do you approach the study of existing game designs?

2 replies on “Do You Keep Design Notes on Games You Play?”

I do not. However, over a decade ago I worked as a product reviewer for handhelds and handheld software, including games.

And for over a decade now, I can’t play a game or use an app without mentally writing a review of it in my head as I do so. It’s really quite annoying. 🙂

Hah, it sounds like some of the complaints game designers have about no longer being able to enjoy games as they are always breaking them down and analyzing them.